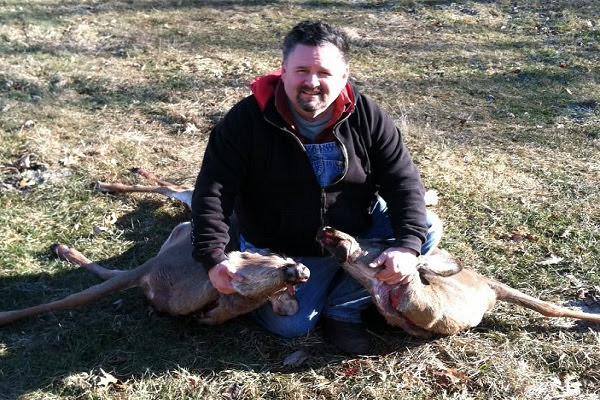 When I went to Malaysia to marry Josie in 2008, I sold everything I had here in America, including all of my hunting gear and firearms.  I have a friend I met while stationed in Germany, back in 1986, who also is from Iowa, Dan.  He had always been after me to go hunting with him in what he says has some of the biggest bucks in the state. Well after not hunting for five years, I decided it was time. I didn’t have a lot of money to spend on a gun, so I decided to buy a muzzle loader since I could also use it for shotgun season. I got a inline Thompson Center 50 caliber with a factory scope.I took it out quite a few times to learn the ins and outs of it, get it sighted in, and just get comfortable with it.

Finally we decided late muzzleloader season it was, January. Dan invited me up for the weekend, which was a two hour drive for me. We hunted the first day in the afternoon, which was quite cold and windy. Not seeing much worth shooting. The second day, more of the same thing. Around noon, he came to where I was sitting, and told me his plan. He would circle around and drive the deer to me, but the ground was quite hilly and thick where he would be going. He took off a layer of clothing and told me to keep his gun in case I would get two shots. He went on his way and it was pretty quiet for about twenty minutes. I then saw some movement out of the corner of my eye, three does. I figured it was getting late, the last day I could hunt, plus I needed meat for the freezer.

It was go time. I picked out the biggest one, waited till I got a clean shot, squeezed the trigger and KABOOM!!! I watched her run about ten yards and pile up. Adrenaline rush! I quickly reloaded, just in case, Dan still had another tag or two to fill. While trying to reload with shaking hands, I saw another small group of does heading my way. No sooner did I get my gun ready, they were in range. Again I picked the largest one, and again KABOOM!!!!! After the smoke cleared, there she was, dropped in her tracks. I was all smiles! Again reloaded quickly just in case.I figured I would stay put waiting until Dan got back. It was hard to wait there with two big does on the ground in front of me. I think I lasted about ten minutes and couldn’t take it anymore. I had to get up and check them out!!!

The second doe I shot was just there 20 yards in front of me, so I started towards her first. I was almost there, maybe five yards to go, when all of a sudden she jumped to her feet, and bolted clumsily down the hill and ran into the fence. After bouncing off that, she jumped it and took off accross the open corn field. I’m thinking what just happened!? While standing there with my jaw on the ground, I heard something else coming my way. It was another group of does. I turned and instantly dropped to one knee. She spotted me and froze facing me without a broadside shot. I figured it was now or never. Thirty yards away and she was ready to run! I put the crosshairs on her chest, gently squeeze, and another loud echoing shot rang out. She jumped straight up in air, hit the ground, and after a couple of flops it was over. I knew she wasn’t going anywhere but in the back of the truck, lol.

Dan finally arrived after a short while. He asked if I saw anything. I asked if he had heard the shots. “Nope” he said “It was so thick and hilly he didn’t hear a thing” I showed him the does, and told him the story. His response was “Well, two out of three aint bad” Haha, isn’t that a song or something???

We did do the ethical thing. We looked and looked for that other doe, but never could find any sign of her. No blood, no fur , no nothing. I still wonder to this day what happened.